A downloadable game for Windows

This is a card battler deckbuilder game made for Weakness week.

This is somewhat inspired by deckbuilding games like Slay the Spire, Dream Quest (I freaking love those games!). You have a deck of cards with abilities, which you play against the opponent who has a similar deck. The twist is that you can see the opponent's moves beforehand and can adapt to it.

UPDATE: Fixed some bugs (Thanks TigerJ for identifying them!), made some card descriptions clearer and added 2 more new characters to play as!

Each fight round, you can rearrange the player's cards (in the bottom half of the screen), by clicking and dragging them.

Click on fight to submit your move - the round is resolved, where each step is considering both your card and the opponent's card in sequence, starting from the left side.

The round ends when all steps are taken. Note that there are only as many steps each round as the player with the biggest hand - so for abilities like Magic Arrow as shown above, if it is the last card and there are no more steps in the round, its ability does not fire.

After you beat each enemy, you get to

There are 6 enemies including a final boss. Can you beat the boss?

Please provide feedback on whether the card description can be clearer, etc.

I wanted to work on a deckbuilding game, and my weakness was my lack of knowledge of ScriptableObjects, Event listeners and general understanding of how to make more modular code. In the end, everything worked fine in editor mode but when it came to building at the last minute Scriptableobjects broke (likely because the file needs to have the same name as the class and can only contain one class, as I had placed two classes in a file), and I had to refactor my code. On hindsight I would do up a tech demo quickly and build and then put in Scriptableobjects, however the structure of having ScriptableObjects for the cards was immensely helpful. Looking forward to using this structure more in games (but still trying to understanding its various quirks!) 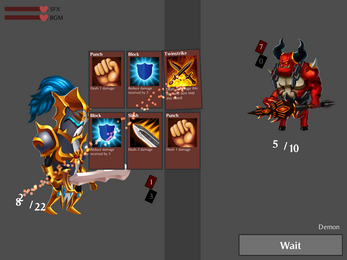 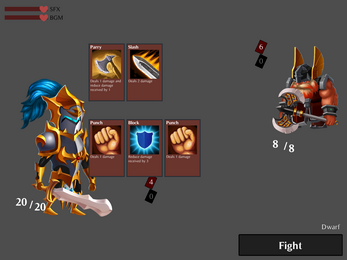