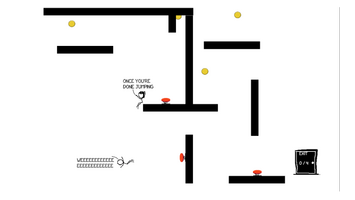 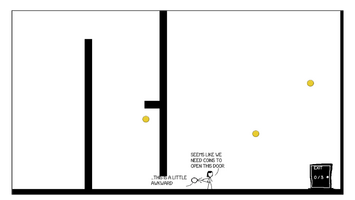 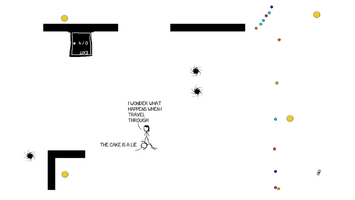 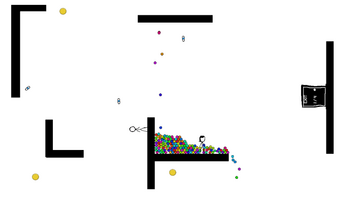 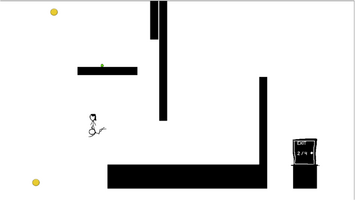 Got #3 which was really great!

I first considered this theme, and I quickly had a working prototype done up. It would be a roguelike survival math edutainment title where you had a calculator that would run out of battery and where the buttons would break, requiring you to fix it every now and then. I even programmed the calculator to work which was surprisingly a bit more challenging than expected (as I had never attempted programming a calculator)

(Perhaps the maths was too hard?)

So I scrapped the idea totally. Might pick it up sometime in the future.

Went on to my second idea. I was dwelling on this co-op game idea I had for a while, which was somewhat inspired by Thomas Was Alone. When I saw the comic I knew that the idea had some potential. A 30 degree angle would be problematic though, so I opted for an easy 90 degrees falling sideways man.

On Saturday I tested the core gameplay mechanic - players using each other as moving platforms. With still some time left due to the pivot, I banged up this prototype.

For the game direction, I wanted a game that wasn't too harsh in terms of platforming challenge, however it would require a lot of teamwork. Settled on the idea of having coin pickups (based on another comic) that could be completed in any order, and instant respawning. Saturday went by, with some sprite work and tweaking the platforming movement. (The spinning girl is a nod to another XKCD comic)

I quickly realized that mobility would be limited to the right and bottom areas of the screen. The top left corner would be the "challenging spot" to get to.  There were often times multiple ways to get to a  particular location, which was an interesting byproduct of the mechanics.

After playing around with the mechanics, I thought of ways to explore the gameplay a little further. Thought of the usual platforming suspects: moving platforms, springs. However, as the focus was on making the players work together as a team rather than playing solo, I tried thinking of ways to force players to rely on each other. I didn't want just another co-op where players would do separate things on their own, such as players working separately, having to toggle a switch to open the way for the other player.

Then I considered the gravity pill- took quite a while to implement, but the mindbending effect it gave made it worthy of inclusion (plus I can't have enough of gravity gimmicks in 2d platformers). The side effect of it is that it opened up the playing field much more, and the top left corner was now much more accessible.

I started off with creating the final level first. It would require all of the player's previously learnt knowledge and require a more intricate number of steps to complete. I noticed that the gravity pill was too effective in opening up the play space, and decided on using a portal to hinder the player's progress instead.

Then I created the most difficult level I could think of, without the gravity pill. It was almost too difficult, and I toned down the challenge a bit. Single players will still find that bit really tough though!

Working backwards, I came up with the easier levels, knowing what needs to be taught to the player before playing those final levels.

There were a few elements that were totally unnecessary but somehow were easy to implement. Like the multicolored balls. Although they were extraneous elements, I decided to use them as hints.

Aside from the initial pivot and redo-ing everything from scratch, I'd say it was a pretty smooth game jam experience, with the most fun in designing and playing the levels (and not so fun -stomping out bugs!). I even had time to add in a basic dialogue system, and added more extra polish for the intro and ending.

In short, it was really fun to make this game. I'd say the most fun is always when you're exploring the possibility space of a new game mechanic - charting new territories, trying out stuff, and discovering fun in the weirdest of places. I had followed XKCD in its earlier days, although it got a little too obscure for my tastes later on, but the comics made for a really awesome jam theme. So kudos to XavierEkkel for organising it!

Other mechanics that were cut due to time, which I might consider in a future update: Switches activating platforms, coins specific to a player, individual gravity on pushable platforms. I plan to extend this a little more with a nice level select menu as well (haven't figured out how to squeeze that into a jam game yet). Let me know if you have any ideas and thanks for reading :D

The Man Who Fell Sideways

A co-op game of romance and weird physics